Lisa van der Heijden (on the left) was one of our very first EPIC apprentices. During her apprenticeship the Public Leadership Foundation (PLF) linked her to One Young World (OYW). OYW is a UK-based charity that brings together the brightest young leaders from around the world during a annual summit, empowering them to make lasting connections to create positive change. This year the summit will take place in The Hague. Lisa regularly blogs & vlogs about her MAD experiences.

“Before I started my journey of One Young World it did not happen a lot: me losing words for expressing myself. But since One Young World it happens on a regular basis. It is something I am not used to, because I always had a reaction or an argument. But seeing so many problems around me makes me feel privileged and speechless. What do I mean? Because of One Young World I go to more events, I speak to more people and I am learning more about people who have a different position or background than me.

For example I was invited to a reading of King Abdullah II of Jordan by the major of The Hague, even our own King and Queen were there. I did not know what to expect, but what happened I could not foresee. This King was one of the most charismatic persons I know, the story he told gave me goosebumps and made me feel sad. Not because it was a sad story, but because he was right that things need to change.He talked about the importance of global solutions; we can no longer think in terms of national problems. The problems we are facing demand an international approach. Finally, someone who agrees with my opinion: Not boundaries should matter but the problem and the topic we are facing.

For King Abdullah II told us that in the world today we should care about global values like compassion. No matter your background or your religion, everyone has learned that you should treat the other as you want to be treated yourself. Muslim, Jew or Christian does not matter, it is the values that matter. Take care of others, listen to them and really listen! Try to understand the other, try to understand their reasons, only then you will solve global problems. 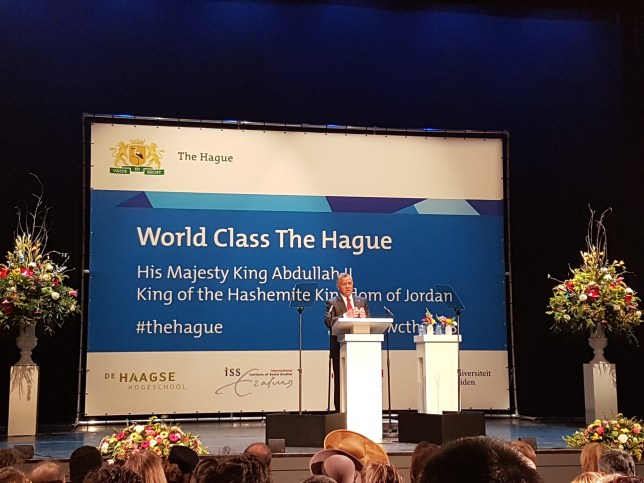 Through One Young World I found out that even in The Hague there are so many cultures, so many people who are struggling every day to keep their heads up. For me this was something that happened outside of the Netherlands, but I was wrong once again. On Sunday the 11th of March I was on the International Women’s Day in The Hague. It was impressive for there were so many women who did a lot of volunteering for others who needed it. I saw women from different cultures struggling, because they still didn’t have the same position as men in their culture. I thought that gender equality in the Netherlands was taken care of, but I saw this is not true. So, I went to one of the volunteers and told her that I wanted to volunteer as well, so that I can help women in the Schilderswijk who feel left alone. I am excited, because I do not know what is coming, but I do know that I need to broad my horizon for there are so many problems just around the corner. And I was blind for helping them. So when it comes to being MAD I want to add something: being MAD is to listen to others until you understand the other. Only then you can speak, but always speak with respect and understanding.

I am looking forward to the rest of my lessons that I will learn with One Young World and my volunteer work!”

This is just the beginning

We use cookies to ensure that we give you the best experience on our website. If you continue to use this site we will assume that you are happy with it.Ok